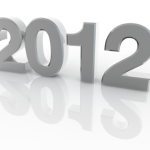 2012 is coming to an end in just a few days so let’s take a look at where the market is at.

The last time the housing market was healthy without stimulus was February 2007.  The National Association of Realtors expects to see a stronger housing market in 2013.