Last chance for mortgages below 5%? 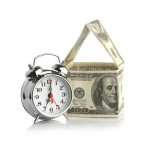 Last year’s 3.5% mortgage rates are long gone — and experts say consumers who hold off buying or refinancing homes in hopes that sub-4% interest levels will return could miss out on today’s sub-5% rates, too.

“We think 3.5% rates are in the rearview mirror now,” says Mike Fratantoni, chief economist at the Mortgage Bankers Association. “It’s highly unlikely that we’re going to get back to those levels again.”

Benchmark U.S. mortgage rates hit a record-low of around 3.5% in late 2012 and early 2013 as the Federal Reserve’s Quantitative Easing III program helped push long-term interest rates into the cellar. Under QE3, the central bank had been buying $85 billion of Treasury bonds and mortgage-backed securities each month in a bid to drive rates on mortgages and other long-term debt down.

But mortgage rates shot up to around 4.4% last summer after the Fed hinted in May at plans to begin winding QE3 down.

“The U.S. economy is growing again, the Fed is beginning to back off of its very-aggressive policy to lower rates and we have [increasing federal budget-deficit] pressures,” he says. “Given all of that, rates are much more likely to go up than down from here.”

“I don’t think there’s the need to rush out and buy a house this very second,” she says. “But I’d recommend locking in a mortgage below 5%, because I expect rates to continue rising.”

On the plus side, Gudell believes lenders will have to ease today’s relatively tight lending standards to keep their home-loan operations humming. After all, she says, higher interest rates typically reduce consumer demand for mortgages.

“I think we’ll see banks be more generous about extending credit to people who perhaps would have had a trouble getting mortgages in 2013,” the expert says.

For instance, Gudell predicts lenders will lower the FICO score required for the best home-loan rates to around 710 from today’s approximately 740.

But Lawrence Yun, chief economist at the National Association of Realtors, says consumers shouldn’t expect sub-4% mortgage rates to return any time soon unless a “major shock” throws the economy back into recession.

“I think that if people are hoping for some temporary dip in rates, they’ll be disappointed,” says Yun, who forecasts 5.3% rates by late 2014. “I realize that many people have seen colleagues and friends lock in mortgages at record-low rates and are jealous. But for now, those rates are history.”