10 Fun Facts About Real Estate Around the World 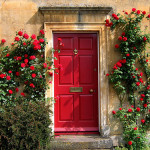 From superstitions to roller coasters- these ten interesting real estate facts from around the world and through history, will intrigue and entertain.

1. In Scotland, home owners paint their front door red when they pay off their mortgage. Throughout history, a red front door has symbolized many things — the ancient Hebrews believed it would protect firstborn children from the angel of death; in the early days of America, it meant the home was a safe place for travelers to stop for the night. And according to Feng Shui, a red front door invites positive energy into a home.

2. The original housewarming party was — literally — a housewarming. Guests brought firewood as gifts and lit fires in all the fireplaces in the home. Obviously this warmed up the place for the family, but it was also believed to ward off evil spirits. Uninhabited homes were thought to attract roaming ghosts, so a new home would have to be rid of that bad energy before it could become a happy abode.

3. Brass doorknobs disinfect themselves. It’s called the oligodynamic effect: The ions in the metal have a toxic effect on spores, fungi, viruses, and other germs — eliminating the organisms within eight hours.

5. Charles “Pretty Boy” Floyd was a Great Depression era gangster who was viewed positively by the general public. When he robbed banks, he would destroy mortgage documents, which freed many citizens of their debts

6. In new York, is is a legal requirement for a seller to disclose if a property for sale is believed to be haunted by ghosts

7. Using prefabricated modules, some builders in China are now able to build 30 story skyscrapers in as little as 15 days.

8. According to forbes.com, Hong Kong, China has some of the most expensive real estate in the world. At an average of $11,000 per square foot in luxury homes, and the average property size roughly 5,200 square feet.

9. A real estate broker in the city of Ermelo in the Netherlands found a great way to encourage prospective buyers to take a quick tour of this house: his company built a roller coaster through it.

10. India’s richest person, Mukesh Ambani, built a $1 billion home. It has 27 habitable floors, including six parking floors for capacity of up to 168 cars. A staff of 600 maintain the home.