The Miracle of the Twin Cities Metro 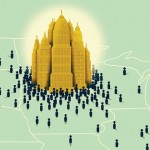 The Minneapolis/St. Paul metro is not only known for it’s beauty and diverse mix of wilderness and urban space, it’s proving to be a finical safe-spot for the country. According to “The Miracle of Minneapolis” written by Derek Thompson and published for “The Atlantic” this month, “Only three large metros where at least half the homes are within reach for young middle-class families also finish in the top 10 in the Harvard-Berkeley mobility study: Salt Lake City, Pittsburgh, and Minneapolis–St. Paul. The last is particularly remarkable.”

To sum up the many qualities the Twin Cities has above the rest of the metros in America:

-Among residents under 35, the Twin Cities place in the top 10 for highest college-graduation rate, highest median earnings, and lowest poverty rate, according to the most recent census figures.

-According to the Center for Housing Policy, low-income families can rent a home and commute to work more affordably in Minneapolis–St. Paul than in all but one other major metro area (Washington, D.C.).

-The Twin Cities have the highest employment rate for 18-to-34-year-olds in the country.

-How did big business start here? In the Mid-1800s, beginning companies such as Pillsbury and General Mills were drawn to the area because of the availability of hydro-power found at the historic Saint Anthony Falls. Since this humble start, Minneapolis–St. Paul is the headquarters for 19 Fortune 500 companies—more than any other metro its size—spanning retail (Target), health care (UnitedHealth), and food (General Mills). In the past 60 years, 40 Minneapolis-based businesses have made it onto Fortune’s list. Minneapolis is unusually good at building and then keeping large companies.

-Minneapolis has the second lowest outflow of of college educated workers. Those that learn here, tend to stay here.

-The metro area implemented a plan known as “Fiscal Equalization” in the 1970s- in which tax revenue is shared between the wealthy and poor neighborhoods. Building commercial success, providing equal services in low-income places and maintaining the quality of life just about everywhere in the metro. Unlike other metros such as New York and LA, the Minneapolis- St. Paul area has generally avoided the harsh separations of class, and equal housing is promoted.

-The Twin Cities’ housing and tax-sharing policies have resulted in many good neighborhoods with good schools that are affordable for young graduates and remain nice to live in even as their paychecks rise.

For more in-depth information, the article can be found here:
http://www.theatlantic.com/magazine/archive/2015/03/the-miracle-of-minneapolis/384975/