“This red paperclip is currently sitting on my desk next to my computer. I want to trade this paperclip with you for something bigger or better, maybe a pen, a spoon, or perhaps a boot.
If you promise to make the trade I will come and visit you, wherever you are, to trade. Hope to trade with you soon!
-Kyle
PS
I’m going to make a continuous chain of ‘up trades’ until I get a house. Or an Island. Or a house on an island. You get the idea.”

And that is the first blog that started a year long adventure for Kyle McDonald, a Canadian blogger. Being inspired by a childhood game “Bigger, Better”, Kyle set out to trade his way up from a simple red paperclip, to a home of his own. He made the following trades through his blog to achieve the final result:

1) July 14, 2005 – Vancouver-  traded the red paperclip for a fish-shaped pen. The same day, that pen was traded for a hand-sculpted doorknob.

4) November 16, 2005– Maspeth, Queens-  made a second successful attempt (after having the generator confiscated by the New York City Fire Department) to trade the generator for an “instant party”: an empty keg, an IOU for filling the keg with the beer of the holder’s choice, and a neon Budweiser sign.

6) December 2005– traded the snowmobile for a two-person trip to Yahk, British Columbia.

8) February 22, 2006– Mississauga, Ontario – traded the cube van for a recording contract with Metalworks.

12) June 2, 2006– traded the KISS motorized snow globe to Corbin Bernsen for a role in the film “Donna on Demand”.

13) July 5, 2006– traded the movie role for a two-story farmhouse in Kipling, Saskatchewan. 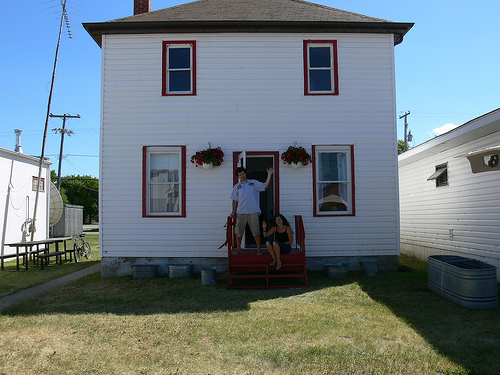