This article originally appeared in the Minneapolis/St. Paul Business Journal‘s website. It can be viewed in its original context here. 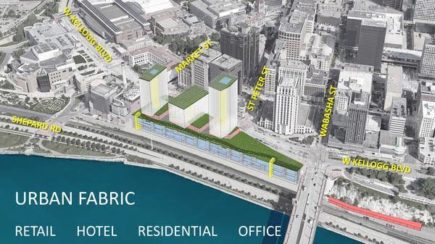 If a Phoenix developer’s plans come true, the former West Publishing and Ramsey County jail site in downtown St. Paul will become a mixed-use project with a balcony connection to the Mississippi Riverfront.

Cardon Development Group is planning a $225 million, three-building campus atop what would be a large parking ramp built up against the bluff where the jail and office building once sat.

Unlike West Publishing and the jail, Cardon’s commercial spaces wouldn’t be built up against the bluff, which is helpful when trying to capture natural light for housing and offices. Instead, the buildings would rise up above the bluffs atop the parking ramp, which will have 1,200 stalls and elevators that connect to a “river balcony” that city leaders hope to build along the bluff.

All of this is very preliminary. At a meeting Tuesday, the Ramsey County Board of Commissioners authorized its staff to begin negotiations with Cardon on the 4.77-acre, county-owned site. The county hopes to wrap up negotiations this summer and a phased construction could run from 2018 to 2021.

The old buildings have been demolished and stabilization should be done by August.

“We have been working for years to transform this riverfront property into an asset for our community,” Ramsey County Commissioner Rafael Ortega said in a press release. “We are excited to work with Cardon to turn this vacant property into a first-class development.”

Developing apartments will likely be the easiest part of the project, since downtown St. Paul developers are enjoying low vacancy rates even while thousands of units have come online in recent years.

Cardon was the only developer to respond to the county’s request for proposals this winter, but the firm has experience with massive redevelopment projects.

Cardon partnered with Red Development on a 1.8 million-square-foot mixed-use Phoenix project called City Scape and it is redeveloping the Williston airport in North Dakota.

“Redevelopment opportunities like Riverfront Properties – with its stunning location along the river bluff – do not come along very often, and we are committed to getting this project right,” CEO Don Cardon said in a press release. “We look forward to collaborating with Ramsey County on this transformative project.”

Another Home Owned by Prince’s Estate is For Sale

This article originally appeared in the Minneapolis/St. Paul Business Journal. You may view the complete article here. 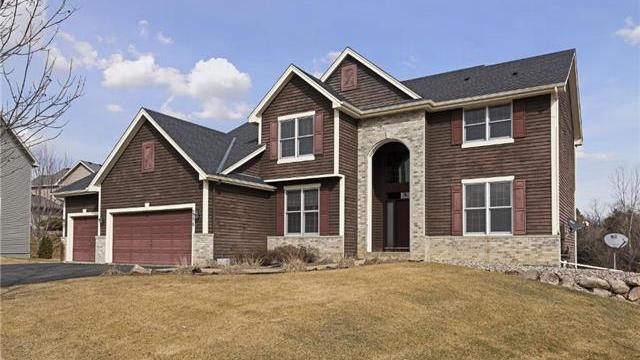 This article originally appeared on WCCO’s website on April 11, 2017. It can be viewed in its original format here.

The University of Minnesota has been named one of the top public education institutions in the country.

“Business First,” which is a sister-publication to The Minneapolis-St. Paul Business Journal, named the university the 15th best public college in the country.

The publication looked at nearly 500 colleges and based their rankings on things such as cost, career advancement, diversity, and resources.

The only other Minnesota school to crack the top 100 was University of Minnesota-Morris.

The University of Wisconsin placed No. 13 on the list.