This article was originally posted on the University of Minnesota Extension website and was authored by Timothy Larson, Lewis Hendricks, Patrick Huelman, and Richard Stone. It can be viewed in its full, original format here.

What is an ice dam?

An ice dam is a ridge of ice that forms at the edge of a roof and prevents melting snow (water) from draining off the roof. The water that backs up behind the dam can leak into a home and cause damage to walls, ceilings, insulation, and other areas. Figure 1 shows a cross section of a home with an ice dam. 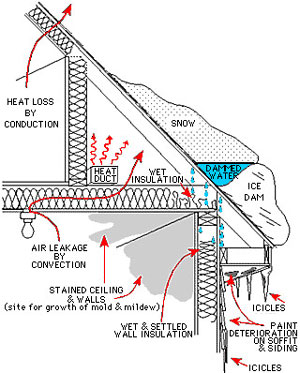 Figure 1. Cross section of a one-and-a-half story house with an ice dam.

The snow on a roof surface that is above 32°F will melt. As water flows down the roof it reaches the portion of the roof that is below 32°F and freezes. Voila! – an ice dam.

The dam grows as it is fed by the melting snow above it, but it will limit itself to the portions of the roof that are on the average below 32°F. So the water above backs up behind the ice dam and remains a liquid. This water finds cracks and openings in the exterior roof covering and flows into the attic space. From the attic it could flow into exterior walls or through the ceiling insulation and stain the ceiling finish.

Since most ice dams form at the edge of the roof, there is obviously a heat source warming the roof elsewhere. This heat is primarily coming from the house. In rare instances solar heat gain may cause these temperature differences.

Heat from the house travels to the roof surface in three ways: conduction, convection, and radiation. Conduction is heat energy traveling through a solid. A good example of this is the heating of a cast iron frying pan. The heat moves from the bottom of the pan to the handle by conduction.

If you put your hand above the frying pan, heat will reach it by the other two methods. The air right above the frying pan is heated and rises. The rising air carries heat/energy to your hand. This is heat transfer by convection. In addition, heat is transferred from the hot pan to your hand by electromagnetic waves and this is called radiation. Another example of radiation is to stand outside on a bright sunny day and feel the heat from the sun. This heat is transferred from the sun to you by radiation.

There is another type of convection that transfers heat to the attic space and warms the roof. In Figure 1, the winding arrow beginning inside the house and going through the penetration in the ceiling, from the light to the attic space, illustrates heat loss by air leakage. In many homes this is the major mode of heat transfer that leads to the formation of ice dams.

Exhaust systems like those in the kitchen or bathroom that terminate just above the roof may also contribute to snow melting. These exhaust systems may have to be moved or extended in areas of high snow fall.

Other sources of heat in the attic space include chimneys. Frequent use of wood stoves and fireplaces allow heat to be transferred from the chimney into the attic space. Inadequately insulated or leaky duct work in the attic space will also be a source of heat. The same can be said about knee wall spaces.

The photograph below shows a single story house with an ice dam. The points of heat loss can be clearly seen as those areas with no snow. The ceiling below this area needs to be examined for air leakage, missing or inadequate insulation, leaky or poorly insulated ductwork, and the termination of a kitchen. 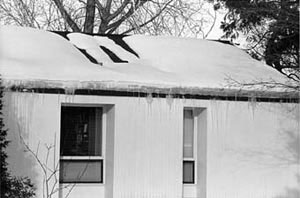 A single-story house with an ice dam. The areas without snow are the points of heat loss.

The photograph below illustrates unusually high heat loss from the roof. There is very little snow left on the roof and at its edge is both an ice dam and a “beautiful” row of icicles. 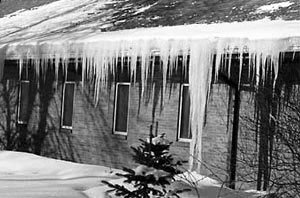 The unusually high heat loss on this roof has caused both an ice dam and icicles.

So it is primarily heat flowing from the house that is causing the nonuniform temperatures of the roof surface leading to ice dams.

Preventing and dealing with ice dams

In all Minnesota communities it is possible to find homes that do not have ice dams. Ice dams can be prevented by controlling the heat loss from the home.

Both of these actions will increase the snow load that your roof has to carry because it will no longer melt. Can your roof carry the additional load? If it is built to current codes, there should not be a structural problem. Roofs, like the rest of the home, should have been designed to withstand expected snow loads. In Minnesota, plans showing design details to meet expected snow loads are usually required to receive a building permit. The plans for your home may be on file at your local building inspection office. To help you understand the plans, or if you cannot find plans for your home, you may want to contact an architectural engineering firm. A professional engineer should be able to evaluate the structure of your home and answer your questions about the strength of your roof.

Mechanical attic ventilation IS NOT a recommended solution to ice dams in Minnesota. It can create other attic moisture problems and may cause undesirable negative pressure in the home.

Interior damage should not be repaired until ceilings and walls are dry. In addition, interior repair should be done together with correcting the heat loss problem that created the ice dam(s) or the damage will occur again.

The second absolutely necessary practice is to construct a continuous, 100% effective air barrier through the ceiling. There should not be any air leakage from the house into the attic space!

Recessed lights, skylights, complicated roof designs, and heating ducts in the attic will all increase the risk of ice dam formation. 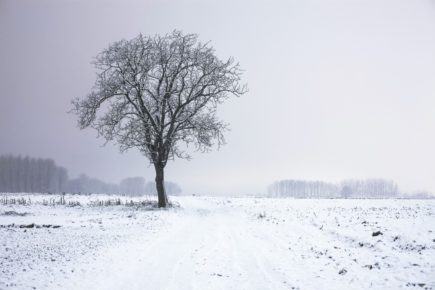 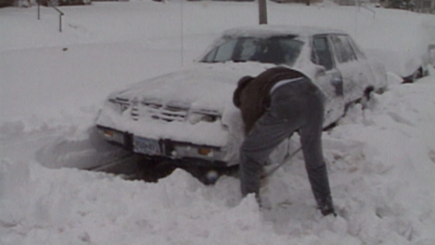 The legendary blizzard of 1991 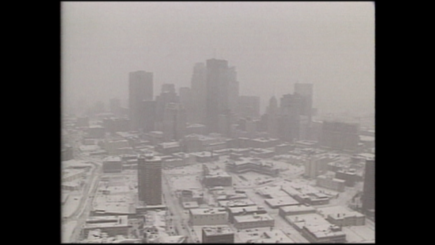 Minneapolis after the Halloween Blizzard of 1991

The snow began to fall just after trick-or-treaters started collecting candy on the Thursday evening of October 31st, 1991

Window Condensation in the Winter?

Why does condensation form on my windows in the winter?

This depends on the types of windows installed and the relative humidity levels in the home.

1. The condensation is forming on the room side of the glass.

This is caused by a combination of high interior air humidity and a large temperature difference between the window and the indoor air. When warm interior air hits the cold window, it decreases in temperature. Cold air cannot hold as much moisture as warm air, which is why the condensation forms. If the condensation forms in large quantities and runs down the glass, the windowsill or underlying wall materials may become moldy or moisture damaged, and could require repairs.

Remedies for reducing the formation of condensation include:

•  Installing heat sources below windows to reduce the formation of condensation by flowing warm air across the glass.

•  Installing storm windows on single-pane windows, and keeping blinds or curtains slightly away from the windows to allow airflow in front of the windows.

3. The following are some of the main features that are available in new energy-efficient windows:

• Double or triple-glazed glass (i.e. thermopiles). These are two or three panes of glass manufactured as one window with a very thin separation between the panes. This separation width provides less convective heat loss than the typical separation width of 2-4 inches, which is often observed on standard thermopane or singlepane windows equipped with a storm window.

• Low-E coatings. Installing heat sources below windows to reduce the formation of condensation by flowing warm air across the glass.

• Low-conductivity spacers. The spacer between the glazing at the perimeter of the window has historically been made out of aluminium, which is not only lightweight and durable, but also provides considerable heat loss. Newer non-metallic spacers are now available to reduce heat loss at this location.

The cost for the inclusion of the energy efficiency features described above varies, but can be 10-15 percent more than standard double-glazed units. However, many window manufacturers are converting their production lines to produce only high-performance units. Some super high-performance windows that are using cutting-edge technology for even more energy savings than those described above are available, but at considerably higher costs.

Proper installation is especially important with high-performance windows because poor installation techniques can negate their performance. Installation should be completed in accordance with manufacturer’s recommendations and should reflect current industry standards. Be sure to check out your contractor’s qualifications to ensure proper installation.

Completion of an energy efficiency assessment is recommended prior to upgrading in order to determine the feasibility of upgrading windows.

This article appeared as a newsletter from AmeriSpec Inspection Services in December of 2015.